South Yorkshire hosted the largest private sector skills showcase event last week, which was attended by over 3,000 young people from 69 schools and involved over 90 businesses.

The ‘Get up to Speed’ with STEM (Science, Technology, Engineering and Manufacturing) event was designed to inspire students from 8 to 25 years about careers in science, technology and the manufacturing industries, through a day of fun and interactive activities. Pupils attended from 55 South Yorkshire schools, whilst some pupils travelled from as far away as Newcastle!

Held at the Magna Science Adventure Centre in Rotherham, Get up to Speed involved exhibitors from industries as diverse as space technologies, medical implants, aerospace, acoustics, construction, rail, water and climate management and postural support. Companies, such as CNC manufacturer Mazak attended from as far afield as Worcester, whilst dozens of businesses attended from the Yorkshire region.

The motor industry for example was represented by the Sheffield Made Simplex 1921 automobile right up to a McLaren and Tesla Model X Falcon Wing demonstrating its full dance mode! 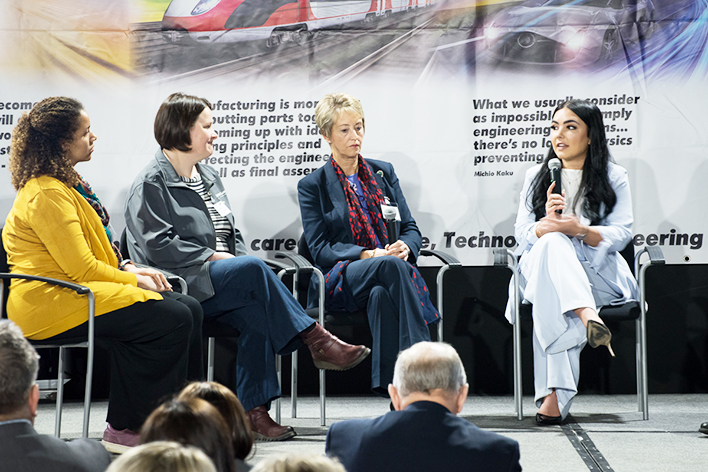 Guest speakers included 24 year old Kate Turner who, as well as being a fully qualified Train Driver, is Head of Planning and the youngest ever senior manager in DB Cargo (UK) Rail based in Doncaster. Dr Rahul Mandal, Research Associate at the University of Sheffield Nuclear Advanced Research Centre in Rotherham and the 2018 winner of the Great British Bake off who was explaining that “if you can do baking you can do science and engineering and if you are doing engineering you can bake”.

The day, organised by the work-wise Foundation and supported by businesses and other local support organisations whilst fun and interactive has a serious purpose as CEO of the work-wise Foundation, John Barber explains: “Get up to Speed aims to play its part in growing our wealth creating skills base to help us achieve our economic and social ambitions. It was created by industry to introduce, inspire, inform and interact with our next generation of scientist, engineers, designers and business leaders. It aims not only to reach out to young people but also those who influence and advise them so they also understand what’s out there not only now but also what’s coming in the future”.

Mick Hood, Human Resources Director at Liberty Speciality Steels, who were headline sponsor of the event, said: “It’s simple for me, I truly believe the success of a business relies on its people. The Get Up To Speed event plays a vital part in building awareness in young men and women in education, their parents and their educators of what a career in manufacturing looks like and the underpinning STEM subjects required. The event grows every year and Liberty is proud to be part of it in its 9th year.”

Marie Cooper, Managing Director at Cooper Brown Enterprises adds “The whole day was action-packed and filled with great opportunities for young people to be enthused about engineering, science and technology careers – and they were! There was a real buzz of excitement around the event, which lasted the whole day! There were many more female students attending this year too, which was great to see.”

Two business/education competitions were judged at Get up to Speed, including the Innovation contest, sponsored by Institute of Engineering and Technology, for which the students worked on a real business challenge. The winner was King Ecgbert School. Gulliver’s World held the ’Gully Fest wonderful world primary challenge’ which involved young people designing new rides and attractions for the 250 acre theme park which is being built in South Yorkshire. The winners of this competition were Wales School.

Work-wise, the organisers, have released the date of next year’s Get up to Speed event, which will be held at Magna Science adventure Centre on 25th March 2020. This will also be the event’s 10th Anniversary.

If you would like to know how to support our work, become a work-wise employer or how your school, students or son/daughter can benefit from the programme then please contact:  [email protected]